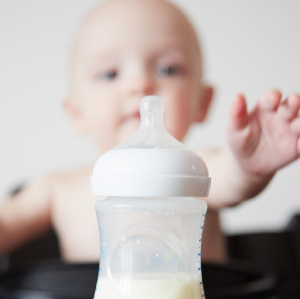 I’m sure you’ve heard about the big baby formula shortage in the U.S. Well, it’s also affecting Canada, as do so many issues we share, due to our geographic and cultural closeness. But I’m old enough to remember previous occasions when baby formula made big headlines…

Back in February, Abbott Nutrition recalled baby formula (sold under 4 brands) made in its Sturgis, Michigan facility after two infants who consumed it died of bacterial infections. That left shelves perilously bare of a product that many moms consider essential to their kids’ well being. The situation was already precarious, as it was.

“A manufacturing and delivery cycle that takes between 12 and 16 weeks from start to finish didn’t keep pace,” A May 10 opinion piece by Alyssa Rosenberg in the Washington Post explaines. “Freight delays held up crucial ingredients. Like many other industries, formula manufacturers struggled with labor shortages. And as 2021 turned into 2022, a spate of severe winter storms slowed deliveries of products to store shelves.”

Like many folks with a public megaphone, Rosenberg goes on to demand the someone ‘do something’ about the shortage. Others have claimed the situation shows that men in general (the vast majority of whom don’t have primary responsibility for infant care), and the government in particular (the elected members of which are still overwhelmingly of men), are woefully uninformed about what legions of women consider a life-and-death situation.

“Since I published my thoughts on the nationwide baby formula shortage, dozens of women have replied to share their struggles, many expressing deep frustration over the lack of attention the crisis has received,” Inae Oh writes this week in Mother Jones. “I’ve been moved by these anecdotes, and also genuinely appreciative of those who admitted to not having known about the shortage until this week. It turns out most of Congress, the people who should know better, hadn’t heard of it either.”

Men have offered solutions to the crisis, in replies to Oh’s initial column. But she complains: “Their misinformed ideas further underscore how removed from the process of [baby] caretaking some are allowed to be.”

Ms Oh been a professional journalist for 14 years, but her resume is admittedly impressive. Ms Rosenberg has been around a few years longer, and she, too has built a substantial credit list. But I’m old enough to be their mother. Maybe even their grandmother. And like I said off the top, I’m old enough to have a much deeper and wider perspective on the whole baby formula issue.

When baby formula first appeared on the scene – in 1865, according to Wikipedia – it was intended as an emergency replacement for breast milk; when the mother produced no milk of her own and no wet nurse was available. By 1900 wet nursing was in decline and more and more mothers who needed a solution to their infant feeding problem began preparing their own ‘formulas’.

After the Second World War though, infant formulas really took off in popularity. One reason was the growing desire of women to work outside the home – a situation that precluded breast feeding unless new mothers could arrange 12 to 18 months of parental leave. But that was virtually unheard of in the late 40s and 50s. Pregnant working women were expected to go home and ‘raise their families’. And forget about working outside, or having any kind of career. 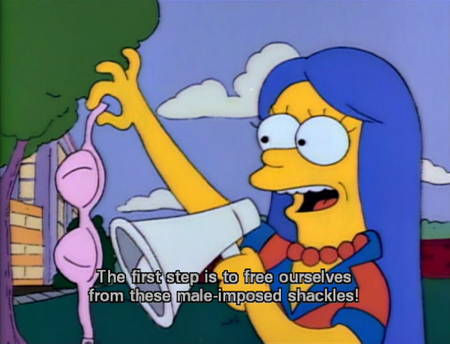 Then, in the bra-burning 60s and early 70s, feminism first reared its determined head. So instantly iconic was the idea of burning their bras that feminists adopted it as the theme of the age. Even Marge Simpson got involved (left).

Women demanded equality with men, not the least feature of which was the right to work outside the home. I remember the women’s magazines bursting with opinion pieces about whether women should, or even could ‘have it all’ – a career and a family. One result of that was women in their legions embracing formula as a means of freeing themselves of breast feeding, which had become an unacceptable anchor tying them to the home and their kids. It’s no surprise that babysitting and the concept of day care soared in popularity.

Now-a-days, young families take for granted the concept of the two-income family and the availability of day care, before- and after-school programs and other services that will look after their kids while they, the parents, pursue their careers. The rising cost of day care over the past few years has even spawned a grassroots movement that deems day care essential and that the service should be provided free of charge by the social welfare safety net. But that’s another story for another time – and probably another blog, altogether.

Back in the middle ages (pre-2000), there was a catchy dairy producers’ marketing slogan: ‘Milk: Nature’s Most Nearly Perfect Food’. That was a reference to cow’s milk. Breast milk is probably the MOST perfect food, especially for infants up to 12 months of age or sometimes even longer. Doctors and nutritionists have always agreed on that. Cow’s, sheep’s, goat’s and other animals’ milks are all deficient in some essential ingredients breast milk provides, and commercial formulas’ are simply trying to approximate the real deal. And breast milk contains antibodies from the mother than can be transferred to the baby, protecting it from infections and other ills early in life before it has developed its own and had all the usual vaccinations.

One issue many folks point to concerning formulas is that they’re nothing more or less than ‘processed, packaged’ foods. They may contain similar levels of nutrients to mother’s milk, but those come from different sources. Protein may be from soy. Carbs may come in the form of ‘unhealthy’ sugars. Vitamins and minerals may appear in forms that are not readily digestible by babies.

The medical establishment has long warned of many drawbacks – health risks – posed by baby formulas. Contamination has been a leading cause of mass formula emergencies in the past. Formulas made in China under brands  owned by Abbott, Nestlé and Mead Johnson were found to contain melamine – a dangerous substance. That was a particularly big scandal, not only because those three companies controlled the lion’s share of the infant formula market. And there have been others.

Back to the future

Now, Abbott has recalled millions of units of its formulas sold under the names Similac®, Alimentum® and EleCare®. The plant has been closed down. And millions of moms are stuck between a rock and a hard place trying to feed their babies. Their reactions range from confusion to panic to outrage. And they all want somebody else to make it all better.

All these political, social and public health issues could have been avoided if moms hadn’t given up breast feeding in favour of their careers. Even though generous parental leave plans are offered by most employers now, many moms apparently don’t use the time off to bond with their babies the best way possible: by breast feeding.

I can only assume that’s because so many millennials and those who have come after them are so deeply addicted to the convenience culture that they don’t even consider breast feeding anymore. That’s a sad state of affairs for all involved.