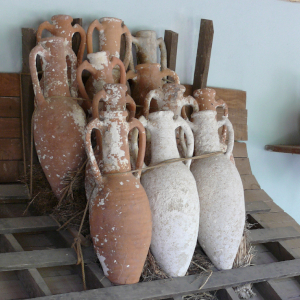 Ancient Tupperware®: Do As The Afghanis Do?

Here is a great topic for a post: a chance to do some history, some science and some traveling all at the same time. Ever wonder why the Romans used clay jars to store and transport food products? They knew a secret other ancient civilizations knew: the preserving power of clay! 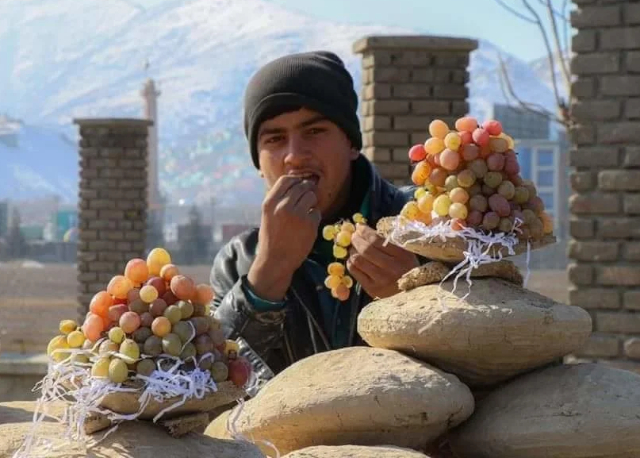 Afghanis have used simple sealed clay pots – kangina – for at least
2,000 years, to preserve fresh fruit for up to 6 months!

I was an avid fan of National Geographic when I was a school kid: couldn’t wait for the next issue to arrive. It might have another tale about an ancient treasure ship, discovered by Jacques Cousteau or Mel Fisher. But I was just as enthralled by the stories of ordinary commercial vessels that plied the Mediterranean even before the Romans. Specifically, I wondered why they used thousands of clay jars – called amphorae (see photo, top of page) – to store and transport large quantities of foodstuffs, especially wine, olive oil and fermented fish sauce (which they used like we use ketchup). Why not just use tankers?

That was a time when folks were just starting to become concerned about the environmental damage that could ensue if a huge crude oil tanker sank, or even just sprung a leak. But that was before the Torrey Canyon, which catapulted maritime oil spills into the news; long before the Exxon Valdez and the Deep Water Horizon. I wondered what would happen if a giant wine or olive oil tanker sank…

But that was never an issue in the ancient world. They used amphorae, rarely losing more than one or two to any single accident. And after hundreds, even thousands of years, the contents of those simple clay jars remained well preserved. Hindsight, they like to say, is 20-20. Why scientists never looked more deeply into this phenomenon, I just don’t know. It could have been because they were too focused on the favourite food preserving material of the day, glass. Or maybe they were consumed by the allure of the new miracle material – plastic.

Would you be surprised to learn that some older cultures still leverage the preserving power of clay today? I was momentarily shocked to hear that folks in the Afghanistan outback still use hermetically sealed clay containers to store fresh foods over long periods.

The kangina is a truly ancient container, consisting of two sun-baked clay bowls filled with clean, dry, unblemished fresh fruit – usually grapes – fitted face to face with one another, and sealed around the mating edges with more clay. When the sealing clay is completely dry, the kangina is stored in a cool dark place or even buried in the ground until the food inside is needed. When it’s time to get at the food again, folks just use a stone or a piece of broken pottery to break off the seal.

Others have come and gone

I guess it was back in the early 1990s that the North African workhorse cooking pot, the tajine, had its moment of glory on the foodie scene. The novel, chimney-topped lid on a shallow base works wonders on stews and other low-and-slow dishes. And for a New York Minute, it looked as though the tajine would become a permanent of part of every serious cook’s equipment roster. But you hardly ever hear about it anymore. Like the clay baker, the South American cazuela and the Ethiopian shakla.

Let’s all make the most of the kangina’s moment in the sun and try this: get two unglazed terracotta bowls, choose a suitable amount of clean, fresh, unblemished grapes from the ever-bountiful supermarket display, and seal the bowls face to face with your own mud –  or wax, or drywall patching compound, or whatever you can find that will do the job. Then store the finished container in the proverbial cool dry place, or – if you’re game – bury it in the ground. Leave it undisturbed for as long as you can stand to wait (up to 6 months). Then open it up and see what you’ve got. You may be surprised by the result!

This could also become an award-winning original high school science fair project. Use real clay from an artist’s supply shop and hand-form the bowls yourself. Document the whole process with photos or even videos. And clear a space on the hearth for your trophy!